Cleveland Rocks... and So Does Westlake's Sibling Revelry Brewing

Just west of Cleveland, on the shore of Lake Erie is a town called Westlake, and in that town is a brewery that has been around for some years called Sibling Revelry Brewing. Having been in Cleveland before during a blizzard, I couldn't help but picture this area blanketed in deep snow and ice, with a ridiculously cold wet wind blowing in from the lake... but luckily this was August, and it was sunny and hot, and that was fine with me.

Typically I like to arrive at a venue at least an hour before my scheduled start time so I can set up, say hello, maybe sip on a beer, and be in a head space conducive to playing music by the time I am supposed to start. On this day I had a several hour drive to the venue, planned plenty of time to arrive early, but got stuck in traffic and arrived about 10 minutes before I was scheduled to go on. Not ideal. So I rushed to set up, didn't have time to introduce myself to the staff, and started playing while still a little manic from the rushing and scrambling. Predictably, it took a few songs for me to relax and settle in, and I remember flubbing a chord or two during the first couple of songs.

Another thing that was a little different about this gig was that I was only scheduled to play for 90 min. Normally I play for 3 hours with a short break, but this night was essentially the equivalent of me just playing my first set... so I also only had time to drink fewer beers than usual, obviously.

The beer is available in kegs, cans, and growlers at the taproom, and throughout Ohio at your favorite beer retailers, restaurants, and drinking establishments.

Sibling is in a good sized warehouse-chic building, with a large portion of the building dedicated to brewing (viewable behind glass from the taproom), a friendly, casual taproom with a long bar, plenty of tables and games and such inside, and a series of large bay/garage doors that open to the parking lot and beer garden and create a nice open-air feeling. I was playing on the patio in the beer garden, positioned so I could face and be heard in both the beer garden and the taproom, which was nice. The beer garden consisted of a patio area and larger lawn, both with tables throughout. The crowd in the taproom looked to be more of an after-work happy hour crowd, where the folks outside were a mixture of young families and twenty-somethings.

With the whirlwind of arriving late and rushing to get situated and play out in the sun, I had broken a bit of a sweat and needed a refreshing and thirst quenching beer to get started, so I went with the Tangelo Fruit Haze (7.5%). Living up to its name, this was a golden hazed New England style IPA, advertised as being fruity and hoppy and enhanced with tangelo for even more tart and fruity goodness. It was a nice IPA, a little hoppier than what you might expect from a fruited haze, but what struck me at the time was not detecting much of the tangelo in the flavor (although it was in the bouquet), and instead noticing more of the piney elements of the hops than the tropical floral overtones. This was fine, it still made for a tasty and refreshing beer, but it just wasn't the tropical fruited haze I was expecting. But beers can vary from batch to batch, so maybe the fruit just didn't stand out as much in this batch.

By this time I had finished my set, and after packing up I sat at the bar for a little bit to My next beer was the Swing State (4.5%) dry-hopped American Pale Ale. Named for Ohio's usual battleground status in federal elections, we had here a medium-carbonated brew that provided a nice balance of malt and hops, light enough to make for a good summer beer, but with enough malty flavor and body to keep it interesting. A crisp amber hue, light head, and medium-to-light fizziness, this was a beer you could sit on the porch with on a summer evening and crush a six pack and call it a good night.

By this time I had finished my set, and after packing up I sat at the bar for a little bit to My next beer was the Swing State (4.5%) dry-hopped American Pale Ale. Named for Ohio's usual battleground status in federal elections, we had here a medium-carbonated brew that provided a nice balance of malt and hops, light enough to make for a good summer beer, but with enough malty flavor and body to keep it interesting. A crisp amber hue, light head, and medium-to-light fizziness, this was a beer you could sit on the porch with on a summer evening and crush a six pack and call it a good night. unwind, have one more beer, and chat. Sibling's beer menus were printed and distributed at the bar, and I have to say that initially I thought their beer selection, especially for a brewery that had been around for a good number of years, was a little limited. BUT THEN I overheard a bartender tell another customer that there was a whole other page on the BACK of the menu, and I felt a little stupid. Ya flip the menu, and suddenly the beer selection and variety doubled in size! Whoda thunk it??? Just one of those days for me, I guess...

So I wrapped up the evening with Sibling's Coffee Red (5.5%) American Red Ale w/coffee from local Duck Rabbit Coffee. As you might know, I love my coffee beers, and while they used to be limited to stouts and porters this year I've had coffee in just about every other imaginable form of beer, and now this was my first coffee red ale. As the name might indicate, it pours a healthy red hue with a nice head, and just a hint of coffee aroma. It's brewed with whole Rwandan coffee beans, which is intended to give it a more subtle coffee flavor, and I guess that works... as the beer drank like a nice quality read ale with just a hint of coffee at the finish. Slight indications of malt and caramel added to the complexity, and a roasty overtone on the back end. Very nice, and this was a good way to end the evening.

Sibling Revelry was a nice stop, and if you're anywhere in Ohio you should be able to find their beers at your local retailer or in many bars and restaurants. Otherwise, if you're up in Cleveland or perhaps heading to Cedar Point or Put-in Bay, it's a worthwhile stop to plan on, not far from the highway.

Next stop, across northern Ohio at Findlay Brewing in Findlay, Ohio... 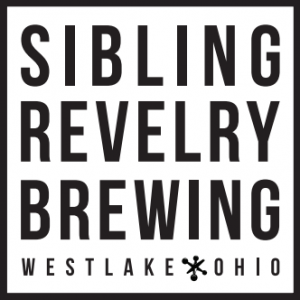