Friday night the tour stopped at Sonder Brewing in Mason, Ohio. Mason is a suburb on the north side of Cincinnati, a community rich in businesses and affluent neighborhoods. Within the last year or so a couple of breweries that I know of have opened in this part of town, The Common Beer Company (which I will be playing this coming weekend) is one, and Sonder the other.

Sonder sits on a 6.5 acre lot in a sort of business development, but bordered by a few larger neighborhoods, so it pulls a good crowd of locals... both the happy hour business crowd as well as the residential neighbors. It's a good sized building with brewing facility, large taproom, and a huge beer garden area complete with a field of astroturf for the kids to play soccer (or whatever) on. I was thinking a beer/dodgeball league would be pretty interesting, but I haven't suggested yet (until just now, I guess...). Perhaps we enhance dodgeball into a drinking game, even... (perhaps the league's motto should be “There Is No Crying In Dodgeball”).

The beer is currently available on tap and via cans, kegs and growlers at the taproom, and can be found on tap at drinking establishments and restaurants in the area.

In addition to the beers and various outdoor activities, they have also partnered with one of my favorite Cincinnati restaurants, the fabulous BrewRiver Creole Kitchen, which has a kitchen on site and is constantly keeping the brewery's menu interesting. I frequent BrewRiver's primary location in Cincinnati, and play there from time to time, and if you like creole food this place can't be beat (in fact the principals worked in New Orleans at NOLA for Emeril before opening their digs in Cincinnati... so they know their stuff).

On this particular night the area was also hosting the Western & Southern Open (part of the pro tennis US Open series), and the tennis stadium and compound is just a stone's throw up the road. The evening was sunny and a little hot, but with such a large beer garden space a constant breeze blows through, so I played my first show at Sonder outside to the beer garden. The field was FILLED with little kids, so I'd say the ample crowd was comprised about half of people engaged in the music, and half of young parents watching their kids. There were a few dogs on hand, but the kids VASTLY outnumbered the dogs.

I started my first set with one of the Sonder flagships to sip on: the You Betcha! (6.5%) New England IPA (haze). Yellow and hazy, with a healthy white head it was a nice sipper as the sun went from being right in my eyes to sinking behind the distant tree line. Made from Galaxy and Citra hops, we had here a very smooth drink with a hops-derived tropical fruitiness. My only complaint was that I drank it too slow, and by the end of my pint it was actually hot from the sun... but it wasn't bad hot!

Their other flagship is a Belgian-style white ale called, appropriately enough, Blanc. This style, made most famous by Blue Moon, has been wildly popular for some time, but I just can't drink it. Something about the aftertaste (of the whole genre) just hits my palate the wrong way, so I didn't sample this one. If you're into Belgian white ales I'm sure it must be good, as it's one of their two most popular beers, and has won them several awards, but we all have types of beers we just don't care for, and white ales is mine.

The rest of the brews I had made me fall in love with the place. Just one really great one after the next. During my set break I thoroughly enjoyed the Zauber (5.5%) German Lager. I read some of the social media beer enthusiast social media groups, and I often see people complain that the craft breweries focus on IPAs, and nobody makes good lagers or porters or stouts, etc.... to which I call bullshit. I don't think these people even go to breweries, I think they're going off what they see on the shelves at their grocery store or gas station. Sonder's Zauber is an example of a fantastic german-style lager. A darker golden hue, frothy white head, crisp and well carbonated body, and a perfect balance of malt and hops, I was actually excited as a drank this one, as after a summer of pale ales, saisons, and sours it was awesome to just throw back a delicious fizzy German lager. I could go back and drink them all night.

This reminds me of something that struck me about most of Sonder's beers, and I discussed this with one of the bartenders at the time: these guys pay a lot of attention towards getting the carbonation level of each beer just exactly perfect. Zauber is a great example to start with, but it was even more impactful with the next few beers I had, which were Saisons and Goses, alone and fruited. A well fruited gose is a special thing, but even the best of them can sometimes get a little sappy towards the end of the pint because they go a bit flat. Sonder really elevate theirs by getting just that right amount of crisp fizz in there, balanced perfectly balanced with each beer's own distinct bodies. And trust me about the balance and believe me that the last thing I'd want is a thin overly fizzy drink (White Claw?)... that's NOT what we're talking about here.

For my second set I sipped on the All In (6.5%) saison (and then later had a sample of the fruited version, so I'll cover both here). A light golden hue, a little hazy, with a thinner white head, the All In had a tropical floral flavor that was tasty and thirst quenching, and again really nicely carbonated. I really loved it as is, but then the fruited was wonderful as well. Enhanced with lemon and lavender, the lavender was surprisingly out front (but not too much so), while the lemon sort of formed a base... creating the sensation that the lemon was underneath with the lavender floating lightly above it. Really, really, nicely done, and tremendous on a hot sticky day.

The gose was called Adela (4.2%), and was another pleasure both alone and fruited. A good gose reminds me in a way of good homemade ice cream (but really more of a sorbet), in that you get that natural flavor and creamy goodness, but there's often a little saltiness in there that just makes it a unique experience of its own. Adela had all this going on, with a brisk combination of sour, salty, and (again) the carbonation... and then the fruited version added a little lime and ginger. The ginger made me a little leery initially, but MAN did it work! Somehow the citrus, the hops, the saltiness, and the ginger all came together to taste like a mild Moscow Mule Gose. Not minty, per se, but still that's where my mind went. Another home run for Sonder.

Finally, at the end of the night when the gear was packed up and I had finally unwound, I treated myself to just one more, and this time it was what I like to call a dessert beer... the 11% Imperial Otto double tiramisu stout. Good god. Creamy, chocolaty, hints of coffee, and thick and rich... a nearly black pour with a light brown head. It smelled like heaven, it tasted like heaven, and it felt like heaven. What a way to end the night. Restaurants everywhere should offer this beer as a dessert option. You can keep your cheesecake, I'll take another of these, please!

It was great to finally make it to Sonder, and I hope to play there again... perhaps as the Fall arrives one more time outside, or inside if it's too cold. A challenge suburban breweries can have is that they tend to be all the way on one side of a city and not centrally located, which may discourage some from making the trip to check them out. Sonder is pulling a great crowd and doing a slammin' business, but if you're a real beer lover in the greater Cincinnati area (or just passing through from elsewhere) you need to make a trip to check this place out. Plus BrewRiver does their food!

Sonder is a new addition to my list of favorites. 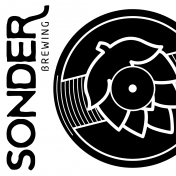 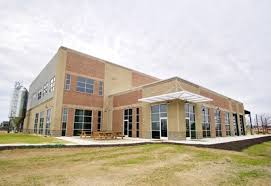