To cap off the coldest week in history for the upper Midwest, I played my last show before heading south at Findlay Brewing Company in Findlay, OH. Findlay is about 20 miles south of Toledo, and also just a stone's throw from Lake Erie... so I was anticipating a painfully cold visit. By some miracle, however, temperatures skyrocketed overnight to a downright pleasurable mid-40s on this Saturday... another thankful case of tragedy narrowly averted!

I did encounter a delay on the drive up to Findlay, and so I literally walked into the brewery just minutes before my scheduled start time, and the place was already packed to the rafters when I arrived. The brewery is in a part of Findlay's downtown entertainment district, and neighbors include a pretty happening bourbon bar just down the street. As I frantically unloaded and set up my gear, I was greeted by my first fantastic beer of the night: the new Buckeye Porter (7%). I had spotted this treat of a beer on the brewery's Facebook age and expressed my excitement to try it, so it was pretty sweet to have one delivered to me without even asking as I arrived. How's that for a friendly welcome?

Wide selection (~20) of very interesting, creative beers. Unfortunately I'm not sure about distribution outside of the brewery... give 'em a call!

The Buckeye Porter is not only a really great peanut porter, but it is actually served with a homemade buckeye (a chocolate and peanut butter candy, a specialty in Ohio... see the photo below) made by one of the Findlay bartenders, Michelle. The porter itself was a delightful medium bodied very dark pour, with a peanut aroma and flavor that was perfectly balanced with the toasty flavors of the porter itself, and then in this case then capped off with the rich, creamy dessert at the end. My buckeye floated in the beer until almost the very end, so the beer then added a nice element to the chocolate and peanut butter. Fantastic!

During my setbreak I moved on to the Hopster Prynne (10.5%) New England IPA, which was another phenomenal brew... hazy pale gold, fairly heavily hopped, yet not obnoxiously so... a bold aroma of hoppy citrus and pine, yet (especially for a 10.5 ABV) was very smooth and balanced, with no bitter bite at the end at all. One of the best IPAs I've had in a while. Very nicely done.

The bar (actually the whole facility, as far as I could tell) was run by a team of young women, all very knowledgeable and friendly and seemed genuinely excited about the beers they created/served, so I started asking for their suggestions on what to try next, and I was instantly served a steady stream of samples that each recommended. The first was the Chilcote's 2018 (6.1%), which is a... get this... habanero milk stout. The last time I had a habanero brew I was in San Diego at Ballast Point, where I couldn't finish the Habanero Sculpin, as it just a silly beer. Evidently the trick is in pairing the habanero with a more substantial beer, though, as the Chilcote's was quite enjoyable. A little of the pepper aroma was evident, and just a hint of it upon taste, but really it hit like a milk stout, and then the slight pepper burn came on the band end. The residual burn seemed to accumulate a bit with each sip, so a pint might be a bit much, but this one is served in a snifter which makes a lot of sense.

Next I was served the Spicy Fruit (6%) which was another habanero enhanced brew, but this time an American IPA. This one the habanero seemed much more up front, I assume due to the fact that it's blended with a pale ale instead of a milk stout... regardless, while the Chilcote's has more a residual heat on the back end, this one was a bit spicy hot right out of the shoot. I'd like to try this one again on it's own, as I think the fact that I followed the habanero milk stout with it probably tainted my perspective.

I followed the Spicy Fruit with the Hop Seshhhhhhh (5.4%) session IPA. True to the genre, it was a nice lighter bodied ale, medium carbonated and suitable for downing a few pints. It seemed a little different from other sessions I've had lately in that I thought I detected an almost rye overtone (but subtle enough that I wasn't quite sure it was rye)... but suffice it to say there was a little extra something to the flavor that made it a bit more interesting than your average session ale.

My final sample before heading back to play my second set was the Bougie (6.1%), a French saison brewed with coriander, rosemary, and blueberry, aged on French oak (!). I mean, that just kinda jumps off the menu, no? The blueberry was delightfully forward in the aroma, more subtle upon taste, and what really struck me was the rosemary. Crisp and refreshing, it was a very tasty brew, and again served wisely in a snifter, as the complexities of the flavor was enjoyable in a limited dose, but I would imagine the rosemary getting to be a bit much towards the end of a pint. Very tasty beer, though, and I'd recommend as a must-try on a flight.

For my second set I brought the One Bloody Hop (7%) back to the stage with me. This was an American IPA with blood orange. It was a good sipper to finish the night with, the pale ale had nice body and was refreshing and thirst quenching. The blood orange wasn't quite as forward as I was expecting, rather slight up front, and adding a little bitter on the back end. I can't say it was my favorite blood orange brew, but it certainly wasn't bad by any stretch.

Findlay has a jewel in this brewery. The people on both sides of the bar were very friendly, and I had a lot of people approach me about the music and the tour between sets and afterwards, and bought tour shirts. The beer selection was adventurous... I could spend a whole second visit trying exotic options such as Carrot Cake Ale, a vanilla coffee stout, a cinnamon vanilla porter, a pumpkin porter, a maple bourbon amber... as well as cider and and a selection of beers from other breweries. The food, by the way, looked tremendous... massive burgers, etc. One of these days I'm going to try to figure out how to sing on a full stomach, as I'm missing out on a LOT of fantastic looking brewery food!

Outside there's also a beer garden, so hopefully I'll come back and try a whole new variety of options and play music under the stars. If you find yourself in I -75 south of Detroit and Toledo, Findlay Brewing is just a few minutes off the highway. Definitely worth the stop.

From here the tour leaves the Midwest and hopefully enjoys warmer weather next week in the Carolinas and Alabama... 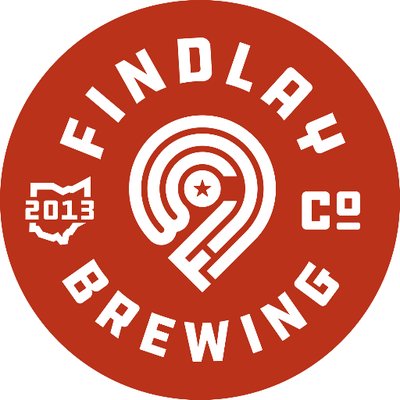 NOTE- as usual, I forgot to take photos during my set, so the photo above is of the room at the end of the night, once most people had cleared out. The place was packed! Check out their website for much better pictures of the gorgeous facility and people.